Well, the short of it is that a man named Willis Carrier invented air conditioning.

Yes, the same name attached to a very well-known brand of air conditioner, and it’s no wonder that a company bears the name of the machine’s inventor.

But that’s not really why you’re here is it?

You want to know what mosquitoes and humidity have to do with air conditioning.

Well your horses, we’ll get there.

Of course, you could always skip ahead, but then you’d be missing out on some fascinating stuff!

Before we cut to the chase, though, let’s hop into a time machine and talk a walk through history.

When was air conditioning invented?

Again the short answer is 1902, but it goes back much, much further than that.

Sure, that’s when the first air conditioner that resembles anything like we use in our homes today was invented. But the idea of cooling your home on a hot sweltering day dates back to ancient times.

The first recorded people to have attempted any form of air conditioning were ancient Egyptians.

They would soak floor mats in water and then hang them in the open doorway. Air would flow from outside and hit the wet mats. The collision of hot dry air and wet mat created a slight cooling of the air and added a welcomed moisture into the arid Egyptian climate.

The method is similar to dumping a bottle of water over your head during the summer. For at least the next few minutes, the wind is just a little bit more refreshing and the heat not so strong.

Not too long after Egypts attempts at cooling the home did Rome come up with an even more efficient method.

There process is similar to the radiator.

I recently visited some extended family in England. Did you know that less than 1% of homes in England have air conditioning? That’s because it’s mostly cold there, so the need for cooling is minimal. But we’re getting off track.

My family visited in the winter time and the place stayed relied solely on hot water sent through pipes in the walls to radiators in each of the rooms. Rome’s form of air conditioning is the same, but flip flopped for cold water.

By using their famous aqueducts to pump fresh water through houses, it significantly cooled the inside of the home. But nothing to the extent of what we have today.

What’s the first thing you think of when I say “Malaria?”

Then possibly central Asia, the islands of the pacific, and maybe the northern jungles of South America.

And if you think that’s where our story begins, you’d be wrong.

Immediately, we all say Florida.

And that, my friends, is where malaria and mosquitoes started our journey toward the modern air conditioner.

Yes, malaria in Florida. And it’s there that a physician named John Gorrie. Gorrie was a bit of a malaria expert, or rather to say he was determined to solve the malaria crisis.

The problem was that it was still unknown as to what caused malaria, yet today we know that disease is transferred through the blood by insects like mosquitoes. There’s your connection!

Gorrie theorized that cooling the air in rooms with sick patients might be the answer to this epidemic. In 1842, he had his chance to test his theory.

It started simple with a bucket of ice, and the machine that he would eventually patent in 1851 worked by removing heat from water until it turned in a solid block of ice. It’s this heat removal process that became a key component to the invention of modern air conditioning.

Willis Carrier and the early 1900s

It was those earlier principles, brought on by great need from something unrelated to comfort and convenience, that resulted in air conditioning as we know it.

Yet, perhaps not surprisingly, the first air conditioner was also created to solve a problem, and not for luxury.

Willis Carrier was an engineer whose job it was to create industrial dryers, fans, and blast furnaces. That is until the Sackett-Wilhelms Lithographing and Publishing Company contracted him to solve their dilemma.

You see, printing, especially in the old days, used live, wet ink as opposed to the toner or cartridges we know today. This ink was then rolled onto plates and pressed onto paper to transfer the ink. And just like any liquid, it was subject to expansion and contraction due to temperature changes in the surrounding area. The company’s owners found that excessive humidity grievously distorted the color register required for fine color printing. It was Carrier’s job to deal with this humidity.

The device that Carrier invented in 1903 transferred heat out of the printing house to keep the humidity level at an even 55 percent. The results of this machine were comparable to using 108,000 pounds of ice per day to cool to the room.

For the next decade or so, air conditioning (as it came to be called) was restricted to use in industrial and commercial environments.

In fact, the first air conditioner that was designed for private use actually debuted in a movie theater in 1925.

After the unit’s debut, Carrier went on to install his “chiller” in more than 300 theaters across the United States.

The term “summer blockbuster” actually originated because of the air conditioner and how many people would flock to their local theater to avoid the heat on a sweltering summer’s day.

For several more decades, commercial businesses jumped at the chance to install air conditioning and be the next local hang out to beat the heat.

In the early years, only the rich could afford air conditioning, and it wasn’t until post-World War II did the air conditioner began to spread more rapidly into the modern home.

By 1965, only 10 percent of Americans had air conditioning. That number soared to 86% in the year 2007 and continued to steadily climb.

All thanks to a man named Willis Carrier.

And of course the mosquitoes and humidity that invented air conditioning.

Today’s HVAC companies wouldn’t exist if Carrier hadn’t invented air conditioning. But thanks to the conveniences of modern air conditioning, we can all enjoy comfort right in our homes.

But air conditioners are still machines and their parts are prone to breaking.

That’s why companies, like Precision Temperature in San Diego, are here for you when you need us most.

Your comfort is just a phone call away. Contact us today for all your air conditioning repair, maintenance, or installation needs. 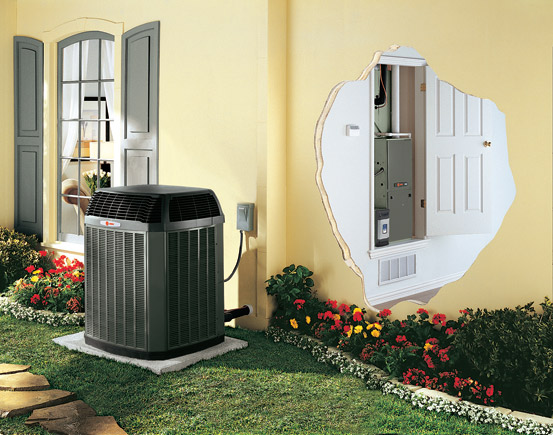 What to Look for in an Air Conditioner

How Much Does a New Furnace Cost to Replace in 2022?

What Does BTU Mean For Your Furnace & A/C?

4 Signs You Need to Replace Your A/C